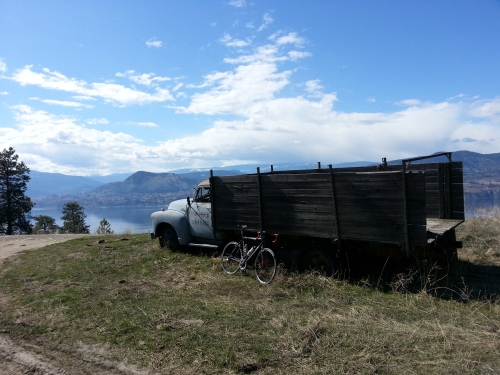 Saturday March 23, 2013 marked the first Kokanee Redbike team camp.  The only unfortunate part was that only Mike and I (Josh) were able to go.  Regardless, we packed way too much stuff into my Xterra and hit the road not so early in the morning.

Lots of wheels which we were glad we brought

After about a 7.5 hour drive we arrives at the Tiki Shores Beach Resort in Penticton.  This is the kind of place that you’d never stay at if you saw the outside first.  We picked it based on reviews and price and were pretty happy.  For less than $60 a night we got a kitchen with a fridge/stove/sink thing and a patio with a gas BBQ. Pretty sweet really.  My favourite part was the laminate floors.  I didn’t have to worry about what was soaked into them (cheap-ish hotel/motel carpet creeps me out). 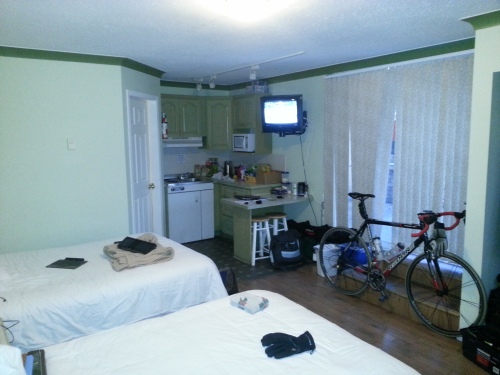 The weather was pretty unbelievable for the entire week with one sunny day after the other and temps hitting 15 degrees.  We were able to mix it up a bit between gravel double-track on the KVR trail, dirt forestry road, and a bunch of paved.  One thing I noticed (being large) was that any direction we went had a lot of climbing.  After grinding away on Sunday at a painfully low cadence I went to one of the local shops and bought a 12-30 cassette (funny that they stock that).  That cassette was the only thing that got me though the week.

Rolling the KVR thru winery country

Amazing view from the KVR

KVR Trail got a little snowed in. Had to turn back.

Riding into the light

Mike is by far the better climber (40 lb lighter) so it was a lot of me getting dropped and him playing angry birds on his phone at the side of the road waiting for me to catch up. 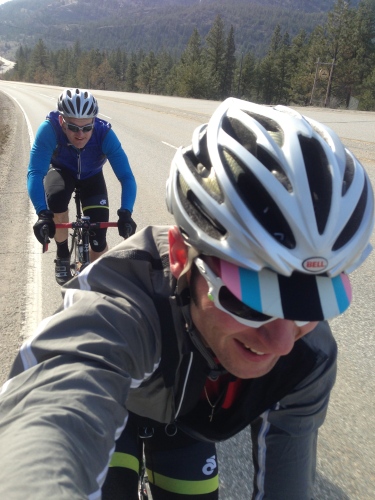 Check out the aero positioning of my bell. One of the reasons I’m so fast…. 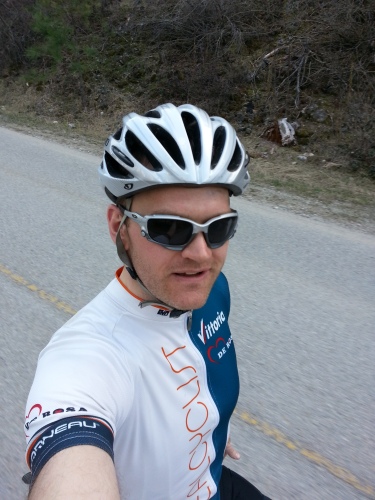 We both worked half time during the week with me even squeezing in a scanner demo for a helicopter overhaul company in Oliver (being a grown-up with responsibilities sucks sometimes).  The days kind of consisted of working in the morning, then riding, and then going to a coffee shop in the evening where I generally worked some more while Mike surfed the interweb.

See that half a cinnamon bun? That was for Mike but I ate it because of the gluten (which I love). 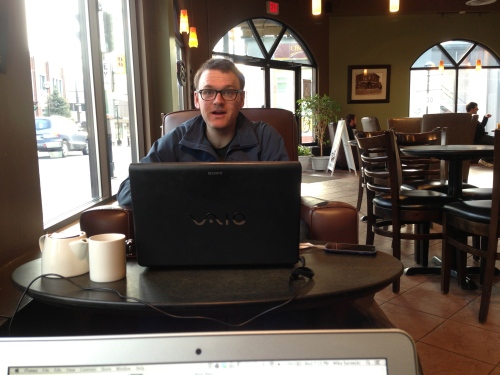 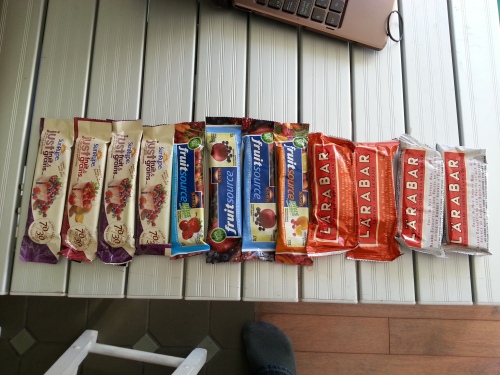 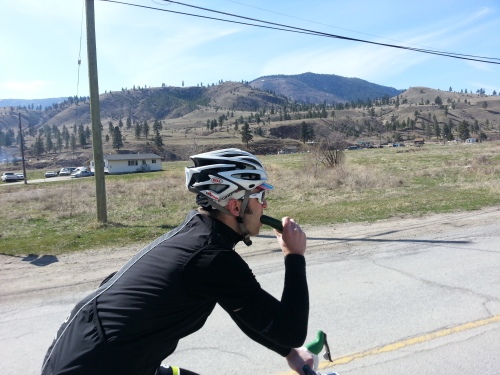 So we ended up riding Saturday through Thursday which was pretty good for me as my legs were well thrashed. Got up early Friday morning and went to Blasted Church.  Not for service cause it’s a winery (I left with a case).

I’d say it was a pretty successful week for me at least with a lot of quality km’s in the legs.  Hopefully we can get more of the team out next year.  Maybe even switch it up and go to Moab.

I guess this is what’s left of the KVR. There were lots of signs but I didn’t bother reading them.