At the beginning of every spring, I accept the fact that I will crash on my bike at least once quite badly by the time winter comes to reclaim the river valley. Therefore, I have endured a list of injuries I have accumulated over the long years of not only mountain biking, but commuting, road riding and indoor trainer riding.

I want to describe my most recent injury that I sustained during the Canmore 24 hours of Adrenaline race on the third weekend of July. I was riding on my first night lap with just a handlebar light where in previous years I had an additional helmet mounted light to help illuminate the trails without the jitteriness, but I had to relinquish it to a teammate in need of a light. I was descending the first downhill after the initial climb, which is not considered an overly technical trail, but in the dark with half the normal illumination, I missed an angled root that pitched me over my handlebars where I landed solidly on my left knee and shoulder. After quickly assessing the initial damage, I finished the lap thinking I avoided seriously injuring myself. When I rode back to the campsite, Shanny put a light on the knee and noticed a narrow but deep cut to the patella that put us in a bit of a shock since we were able to see the gleam of the white kneecap. After getting Steri-Strips applied on my knee by a newby EMS graduate, I decided to ride another lap since I thought the worst part of the injury was the laceration. In the wee hours of the morning, my left knee started to swell rapidly and it was very painful to put weight on the left knee, so I asked Neil to ride my lap for me as thoughts of going to the Canmore emergency room started to infiltrate my head.

After getting the cut sutured up and x-rays confirming a negative on a possible fractured patella, we went to breakfast to Communitea. It was there that I noticed that my left kneecap had disappeared into a mass of flesh making my thigh blend perfectly in to my calf. That swelling was due to my prepatellar bursa sustaining a blunt impact from my fall causing it to start inflaming. There are 4 bursae in the knee region. The supra and infra patellar, the prepatellar and pes anserine bursae. The most commonly injured bursa is the prepatellar due to its superficial location right in front of the patella, therefore any force on the patella will be felt on the bursa. The secondary reason for patellar bursitis is repetitive contact and irritation like floor and tile installing, but a cyclist would be more concerned with blunt trauma as this is the more probable cause of injury. In fact, cyclists should be very appreciative for the bursae in the knee because its main function is to reduce friction between the patella, quad tendon and other soft tissues. This allows us to pedal thousands of times during a ride and not create any pain or inflammation in the knee joint. The most obvious symptom of a prepatellar bursa is significant tenderness and pain with any contact to the kneecap where the bursa is located. 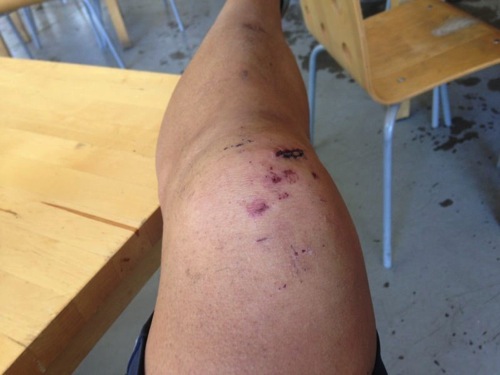 Mark’s Banged Up and Swollen Knee after 24hrs of Adrenalin

It is also painful to put any weight on the effected side so walking, running or stairs stepping is very difficult. From a cyclist¹s perspective, it was very interesting to notice that walking and going up and down stairs was painful, but pedaling a biking did not irritate or cause any pain which was a pleasant surprise allowing me to ride in the TR3. I suppose it¹s the fact that when we pedal we do not put our leg in full extension or flexion therefore not putting force on the bursa to cause pain or irritation.

The treatment of knee bursitis is the same as most soft tissue injuries-RICE. Resting the injury is essential to prevent further damage. It makes sense, but athletes have a hard time following this first rule. Icing the affected area right away will help reduce inflammation. Most soft tissue injuries respond well to Nsaids like Advil and so it can be a part of the rehab program. Compression also helps reduce swelling. I used Kinesiology tape to help drain the swelling to get my kneecap back. Elevation was the easy part as I just laid on my couch with my left leg up, but I did not stop cycling which I think is a more salubrious way of reducing swelling in the joint as it creates blood flow.

After 6 weeks of lasering, Nsaid swallowing, K-taping and light riding, the left knee is still not 100%, but it is close to 80% as I fell biking in Terwillegar today and hit my left knee on the handlebar and it was not nearly as painfully tender as before. It still hurts with full extension of the leg and I cannot run as of yet, but I can ride quite hard now without aggravating the bursa. I realize why so many downhill and enduro racers wear those knee pads while racing as the kneecap is so vulnerable to contact during a cycling crash. Because the knee is a large joint that heals slowly due to the movement, preventative measures for cyclists is very important for a fun long riding season.