I don’t want to think that I was at all prescient about what happened during the weekend of the Coulee Cruiser race in Lethbridge, but wow, talk about a spring snowstorm!  If you had read my previous blog about how the arrival of spring snowstorms reminds me that the first ABA cross country mountain bike race was upon us, you could say that I jinxed the race because it was cancelled due to rain and snow, making the trails un-rideable. 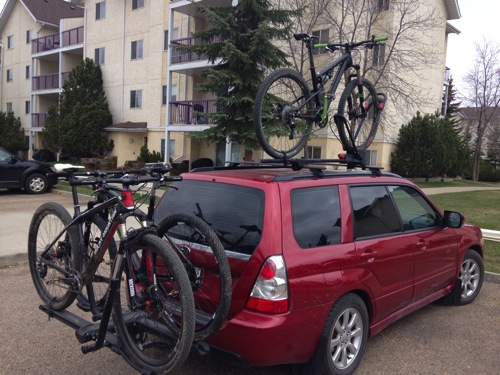 On the Friday of the race weekend, Shantel, Brad and I loaded up the Subaru with our mountain bikes and race gear to head down to Lethbridge and enjoy the first road trip of the year.  With our travel mugs filled with coffee and heading down south on the QE2, I received an ominous phone call from Josh from the ABA.  Now, we are friends, but for him to call me at 11:00am, it didn’t feel like a social call, and it wasn’t.  He told me that he was standing in the coulees at Lethbridge College and the trails were so muddy and slick that he was barely able to stand still to take a picture.   I told him to cancel the race immediately even though the race was Sunday and there was a slim chance of the trails drying out.  But similar to Edmonton trails, the Lethbridge trails are composed of clay, and when it gets wet, the clay turns soft, slick and soupy.  Josh had another meeting planned with the race organizers to discuss the race conditions, but he promised they would make a decision within the hour. 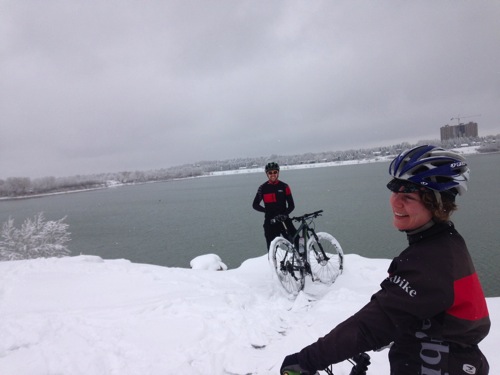 Now, we had to make a decision with the impending cancellation:  Do we just cancel our accommodations in Lethbridge and Calgary and stay home or do we just spend the weekend in Calgary and have a fun team building weekend?  Well, by the time we received the official cancellation notice, we were near Red Deer so the three of us decided to travel on and spend the weekend in Calgary for some quality bonding time.  Brad is originally from Calgary so we had a place to stay for the weekend, which assuaged the disappointment of the cancelled race.  When we arrived at Brad’s parent’s house, it was snowing moderately hard and we were tired from the drive.  As cyclists, we decided that the best way to get our motivation up is to get out there and ride in the snow and 3 degree temperature.  Of course, we didn’t have fenders or booties, so within 5 minutes of the ride, we were completely soaked top to bottom. Shantel forgot her glasses so her eyeballs were being pelted by snowflakes while my toes and fingers started to freeze.  Brad gave us a lovely tour of the Calgary suburban neighborhoods while barely avoiding getting hit by cars that were surprised to see cyclists out during a snowstorm.

When we arrived back to the house, we decided that the only remedy for our dour moods was for us to hit the Calgary nightlife and get completely inebriated with sweet, sweet beer.  After a hot shower, we headed out to The National on 17th.  I knew it was going to be an epic night when we walked in and immediately saw Colm Meaney from Star Trek: The Next Generation and The Commitments fame.  I mean, he was a big deal and a big man, literally, as I texted all my Trekkie friends and they went completely nerd crazy.  Can you imagine if I ran into Patrick Stewart?

Shantel and I were quite pleased that The National’s beer prices were based on volume and not on the type of beer.  So, we ordered the Ommegang Saison and the Dieu du Ciel Rosee Hibiscus in pints, and that was the beginning of the end.  The rest of the night was quite foggy as I must have been in a fugue state, but I did manage to get to the Brad’s parent’s place in the correct bed thus avoid a “Three’s Company” mix up.  All that winter training really paid off.
I woke up the next morning at 10:00am to the smell of the most glorious scent in the world, sausages.  Brad’s dad, George, made us breakfast as he knew full well of our morning impairment.  With our bellies filled with sausages and waffles, we had to decide whether or not were going for another urban bike ride, but after a quick deliberation, we headed to some hippie yoga studio for an hour and a half of Yin yoga.  This was the mellowest yoga class I had ever been to, ever.  We put ourselves in a total of 10 poses for the entire hour and a half, and one woman just slept for the entire class (one would have to assume that she had a yearly pass).  It was basically nap time for adults, a sweaty one at that as it was one of those “hot yoga” places where they needed to have special tags just so you don’t get your awful UGGs mixed up at the door.  I do love yoga, but I think I will stick to the power yoga next time and just take my naps at home.  It’s cheaper and less embarrassing. 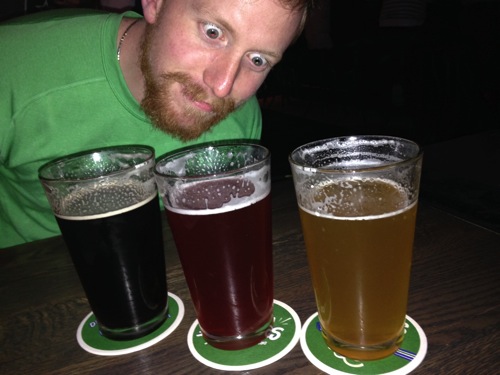 After another night of beer drinking at the awful Craft pub, we load up the car and headed home. During the drive, we were reminiscing about our relaxing weekend of November urban cycling in May, being Star Trek struck, being feed waffles and sausages, bike shop perusing and going to the laziest yoga class ever and we decided that it was a great start to our race season.  Bring on the Royal River Valley Rumble III, baby!!!