For those of you who know how vitriolic I get when people use the word “literally” incorrectly or unnecessarily, you are probably wondering how I fell during a 90 second race. The answer is: quickly and easily.

When Mike B suggested that Hardcore should host an Eliminator race preceding the XC race in May, I had absolutely no idea what he was talking about. I imagined a bunch of cyclists biking around with laser tag equipment shooting each other until there was only one person left (Hunger Games with bikes essentially). He described it as a short loop where four starting racers would race against each other and only the top two would move on in continuing heats until a final heat declared the podium. I thought to myself that I would get absolutely destroyed in that kind of formatted race where power and aggression is essential to winning so I, of course, signed up. 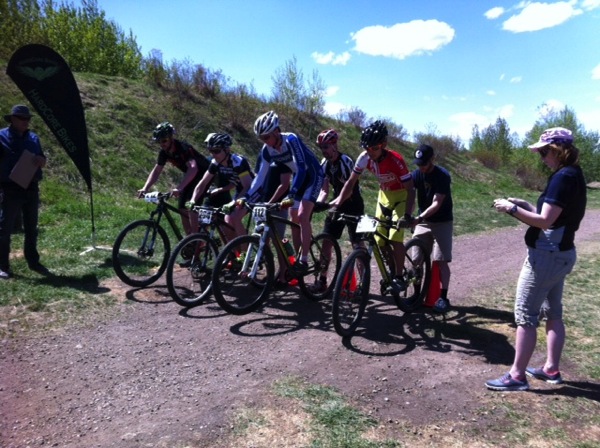 Brad lined up in pole position

It was a beautiful Saturday afternoon at Terwillegar park for the Eliminator race, and I was quietly nervous for the race because there was absolutely no precedence. We had no clue as to whom would be the favorites since all we had done has been cross-country racing, and this is a totally different kind of race. It was a four person start where your bike is held up by someone so we can be clipped in and ready to start, similar to time trail starts. The race starts with a flat sprint into the first of three right turns (Yes, the entire race consisted of only three right turns) where you had to be aggressive to hit the climb first. The climb was a gravelly double track with a center rut that took about a minute to make it to the top. The second right turn was the start of the descent, which only had one fast and safe line to the left. Then, you come ripping down the trail to make the final right turn to the Start/Finish area. Sounds pretty simple, right? 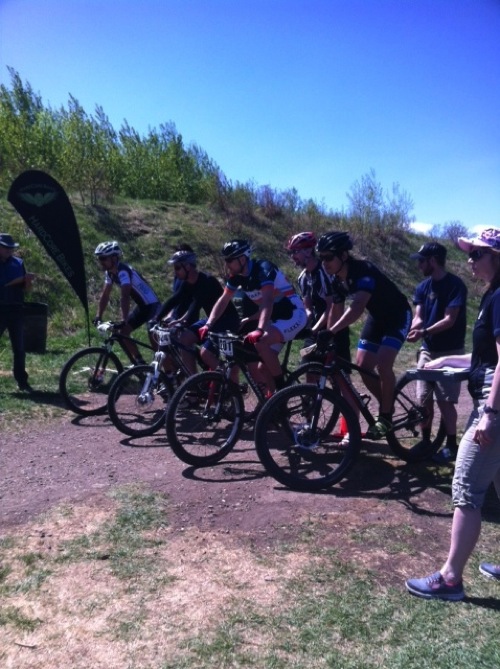 So, there I was, clipped into the pedals with a stranger holding on to my bike from behind while I perched over my bike like a 100m sprinter. It was utterly bizarre to be in that position since I was straight up and down with my wheels pointing straight as opposed to “trackstanding” with the bike angled and wheels askew. Then, the whistle blew and the next thing I knew, everyone was in front of me because I didn’t adjust my gearing properly for the start and it was too tall. While trying to push my heavy crank, Sam, James and some guy named Kory all hit the right turn well in front of me. In a panic, I started the climb by standing off of my saddle and hammering after James and Sam. Just when I caught up to James, I thought to myself that I had to keep going hard to catch Sam’s wheel. That didn’t turn out to be such a great plan. I somehow ended in the gravel rut in the middle of the trail and spun out the rear wheel. This forced my body to lurch forward onto my front wheel which also slipped out and hence the fall. I remember falling on my right cheekbone (Which is the sole reason I got modeling gigs in Japan in my 20’s), but then quickly getting up to salvage the race, but it was over as I saw Sam and James head towards the top of the climb, and since the rest was downhill, it was impossible to catch up. My professional Eliminator racing career just disappeared in front of my eyes.

I’m not going to lie, I was pretty choked crossing third, and not because of the crash, but because I had this naïve thought that I may actually be good at this. Once I rationalized the fact that I’m 41, never BMX raced, hate climbing and don’t like elbowing other racers, I started to feel better about my natural “suckiness” at Eliminator racing. But then, the physical pain from the crash started to manifest. I looked at my right knee and it was bleeding from multiple cuts, and my right elbow had a bloody abrasion. Mike B’s comment to me was, “Of course, only you would fall during the climb”. The man is a saint.

Brad was very competitive and Neil came in second which I latently expected as they are great sprinters and bike handlers. I’m hoping that this experience will embolden me to keep trying different aspects of bike racing like track, road and BMX. It was nevertheless fun to hang out with the ABA racer crowd before the impending XC race Sunday. I just hope I don’t fall, again.