Well, Round 2 of the 45NRTH Fatbike Triple Crown is in the books! Yowzers, what a week it was leading up to race day. Fatbike mania! Chilly temperatures and a heavy snowfall can’t keep Edmontonian’s off of there fat bikes. 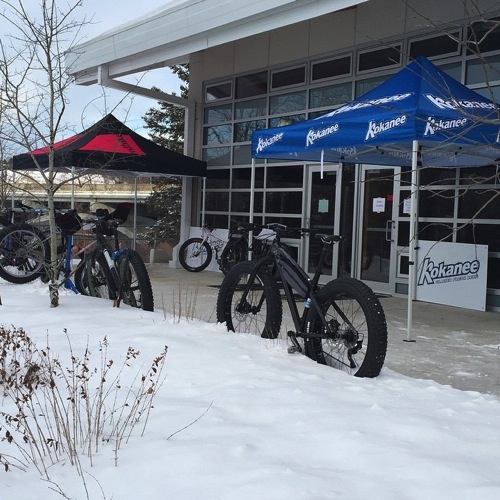 First off, it was great to see a peaking interest from the local media in fat bikes and our race series. Both Mark and I were able to squeeze in a couple of appearances on TV in the week leading up to the race. Now Mark, know as Mr. Hollywood, is a seasoned veteran in front of the camera, as he has appeared on the news many times to talk about cycling in Champion City, but I was able to hold my own and not sound like too much of a nerd on TV.

We got the word out about the series on the CBC evening news sports segment, a Global News lifestyle piece, a blurb on CTV Edmonton Morning Live, and a radio spot on CBC Edmonton AM.

Locked and loaded for Round 2

With 10-15cms of fresh snow on the course from the Thursday night and Friday morning snow storm, the original Round 2 course had to be redesigned, as sections were literally untracked, and totally unrideable. Mark and James did an excellent job re-routing the course, and it was still both challenging and fun. The name of the game was definitely risk versus reward. Risk pushing the speed at the reward of speed, however, if you didn’t hold that 5″ wide line in the fresh snow, you’d be dabbing at best or going down at worst. I did a lot of both! My right calf and butt check were screaming by the end of my 2+ hour race. Making the situation worse was the flat light and shadow that covered most of the tight-rope lined single track as I found it tough to see the line to stay on.

Sheldon, who is fatbike-less for now, decided at the last minute to hope on board one of the demos from Cranky’s and ripped  lap in just under 44 minutes to a 3rd place finish in the 1 lap race.

Conditions were tough in spots – faster to run rather than ride (Photo: Greg Loveday)

Off the whistle I’d figured it would be a race from the front, so I was happy to oblige as I set the pace for the 1st half of the lap. Mitchell, who won last round and is the Full Crown overall leader, was glued to my wheel as we motored through the opening lap. With 30 less pounds to haul up each climb, I slowly eased out a gap on each lap on the climbs, only to have Mitchell bring it back on the single track that I struggled to see the line.

It was an easy course to achieve an ‘out of sight out of mind’ position, and that’s what I did. I rolled into the finish just under 2 hrs and 10 minutes, holding off series leader, and pro motocross rider Mitchell by less than a minute, with my upper body frozen with sweat ice, happy to call it a day.

It was really fun to race the race I organize, and I’m excited to see so many people on fat bikes out ripping it up on a cold, but sunny winter day. Thanks to everyone who made it out, braved the conditions, and tested their fat bike handling skills. I really think we’re on to something here, and I can’t wait for the next round on March 15th. For more info about the 45NRTH Fatbike Triple Crown, head on over to redbike.ca.