Well I’m fortunate enough to almost have a cool job that affords just enough travel to make it fun. This past week I set of to Victoria for a few days of work at Bear Mountain Resort to host some brokers for a not so boring couple days of sales training. I purposely booked the early flight into Vic so I could partake in a little MTBing on Sunday. My flight arrived at 7:27am – plenty of time to shred some single track.

I promptly messaged Kona pro racer and fellow Alberta Boy Cory Wallace, to see if he would be in town to show me some trails. Fresh off his win in Vietnam, he let me know he’d be up in Cumberland for round 3 of the Island Cup. I quickly googled it to learn that race time was noon, and with my rental car it would only take my less than 2.5 hrs to get there from YYJ airport. “I’m in”! Signed up online that night.

Who makes a car without cruise control now-a-days?! Apparently Mazda as my rental did not. So cruising down HWY 1 up and over the Malahat at 90km/h was a bit trying, but my Spotify playlists kept me boppin’ to the tunes and made time pass quickly. A quick stop for coffee and water for my bottles in Naniamo, and I was on the home stretch to Cumberland. To my surprise, the final leg of highway had a posted speed limit of 120! I had to do a double-take, but the next speed limit sign confirmed it was a go-go! Sweet!

With perfect timing, I rolled into Village park with just enough time to calmly build up my bike, fill bottles, change, and warm up for the start. The course was 3 laps of ~30mins and Strava says there was 662m of climbing. I’m happy to confirm the climbing legs showed up for work on time today, and I quickly settled into 2nd place behind Mr. Wallace as we burned up the fire road and entered the punishing clear cut single track. I definitely had some rust when it came to the downhills, as it was my first time on non-snow trails in 2015, and a few B.C. local riders blew by including Rocky Mountain/BC Bike Race’s Andreas Hestler. He is a king at riding the knolly rocky rooted undulating clear cut single track as he politely passed and disappeared in front of me.

What was really impressive to me, even more than the 180 racers who took to the start line Sunday was the number of families I passed on the trail. With no exaggeration, I passed 15-20 families out for a Sunday MTB ride on the technical single track of Cumberland. It was slightly annoying to pass all of them, but pretty cool at the same time. Given this really was a fun race with only bragging rights on the line (no prize money) it really wasn’t a big deal. Also cool, but slowing us down was ‘Skippy the Trail Dog”. I don’t really know his name, but there was this dog on the trail ripping right in front of me. I pretended it was my dog for a while, as it’s a dream of mine to have an awesome trail dog, but ‘Skippy’ began to tire and slowed myself and Parker down a bit. Finally I yelled “Go Home” and he did – I’m a trail dog whisperer according to Parker.

I had a bit of a crash as I took an awkward line a little too slow, and lost a couple of minutes after needing to fix my saddle (dang single bolt seat posts), but chased my way back to 6th place behind Mr. Wallace who won. Definitely happy with how I climbed and I will get more comfortable going down hill soon. After the race, there was a great BBQ that continued the awesome vibe of the Island Cup as I took Mr. Wallace up on his offer to go for a spin. 50 mins of single track later, we got back just in time for the awards.

What a great grassroots event! MTBing is alive and well on the Island and I hope to get another chance to hit up another Island Cup…I recommend it to everyone.

Cory with his chocolate hardware 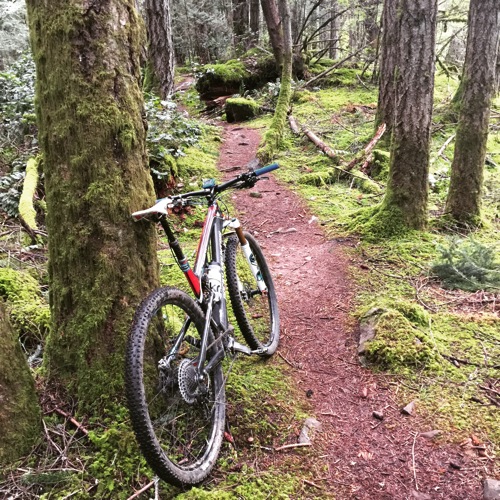 MTB trails right out the back of my hotel 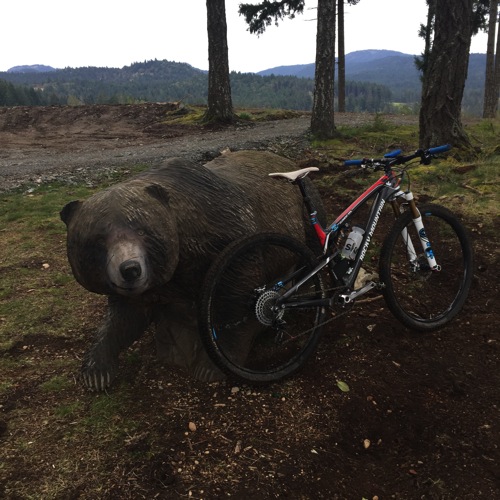 It’s always nice to ride new-to-me trails, and a developing network is right out the backdoor of the hotel.  Always squeeze a ride in when you can – I sure did.

Riding and playing with my iPhone Slow-Mo