As I get older, time seems to get more unpredictably relative. Despite the usual overbearing and longwinded Edmonton winter, I found myself going from reveling in the Sedona Red Rock during a February cycling trip to overheating and recovering in the late May sun from the Devon ABA race. I feel like Matthew McConaughey in Interstellar going through that wormhole or John Cusack going back in time in Hot Tub Time Machine; how did three months go by so quickly?

So at this point, I’ve done two ABA races and a handful of local Tuesday Fattire races along with countless redbike group rides and it’s barely June. Hopefully, I don’t sound too dour or unappreciative of the hot and dry weather allowing me hours upon hours of ride time. I do love mountain biking, but under most circumstances I can rely on the occasional rain-out days where I can relax, catch up on some reading, see some of my non-cycling friends, work on my ceramic pottery and dust underneath my bed. Luckily, at Kokanee redbike, we have a great cast of characters who help out with organizing the weekly rides and races so I have been able to keep my semblance of sanity. 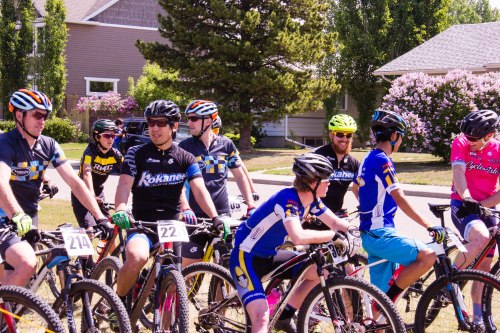 Barely. Yes, Edmonton is in the middle of a drought which I would easily take over the relentless thundershowers which can plague us mountain bikers during certain weather patterns, but it is not without its misgivings. Without moisture, the trail conditions quickly go from firm and tacky to soft and loose, which can cause early season crashes. Since the end of March to today, it hasn’t rained. It snowed a foot the day after the Provincial election where the NDP surged ahead to secure a majority government which instigated predictable “reversing global warming” and “the PCs shredding documents” jokes, but it has hardly rained in 10 weeks. I have already slid out in Cambodia 3 weeks ago where I injured my left shoulder and thought I would be incapable of cycling for months. Luckily or ignorantly, I kept cycling and the shoulder has not bothered me and has seemed to be healed.

Already in the early days of June, most of my friends and teammates have suffered significant crashes that required medical attention and some time off the bike. I wouldn’t necessarily blame the loose conditions as the sole cause of such misfortune because I’m sure the early season eagerness was a factor, but when the season hits hard and fast like it has this summer, it’s ripe for unwarranted accidents. I went out for a ride today with some good friends to hopefully check out the new trail south of Terwillegar called Mustang. We had the entire afternoon so we took the long way around by going to Patricia Heights/Wolf Willow area, but before we even made it to the end of Six Shooter, Richard slid out on one of the many off cambered turns and hit his left knee to his bar. When he dragged himself and his bike up to Saskatchewan Dr, his left sock went from white to bright red due to the collection of blood streaming from his knee. Because I had a similar injury, I told him to go home, wash out the cut, seal it and then ice it for the next 24 hours. Another victim of an apparently easy turn that ended up being loose for the front wheel. Then, once we got to Terwillegar, we instinctively went into Fireman’s Trail, but on the initial downhill, Mike kicked up a large wood stump that kicked my front wheel offline into a tree. I remember the large yet fragile sound of my brand new Giro Synthe helmet collapsing yet feeling no pressure or force on my head. The force of the tree went from my helmet to my neck then to my right shoulder where I eventually bounced backwards off my bike. Young Colter Young thought I was going to hit the ground and not get up as he witnessed the impact of accident which from his viewpoint was significant. I just calmly took off the helmet to observe the dent on the top right side and the two cracks on the inside foam. I felt totally fine except for the abrasions on my right neck and the rotated controls on the right side of my bar. It’s cliché to say that the helmet saved me from significant harm, but once you experience the sound and feel of that helmet doing exactly what it was designed to do by absorbing force so your brain doesn’t, it gives you better appreciation of why you spend your hard earned money for that piece of equipment.

My point with this particular rant is to let the 6 people who read my blog know that we have a long season ahead of us and that we should all calm down and enjoy each moment riding the marvelous Edmonton trails. Let’s keep our wits and helmets on and enjoy the summer until time slows down in November.