With the Canada Day holiday on a Wednesday this year, it only made sense to make bookend cycling trips to maximize the holiday time. At least that is the perfect justification to take a week off and going mountain biking in Fernie, Coleman and Jasper. 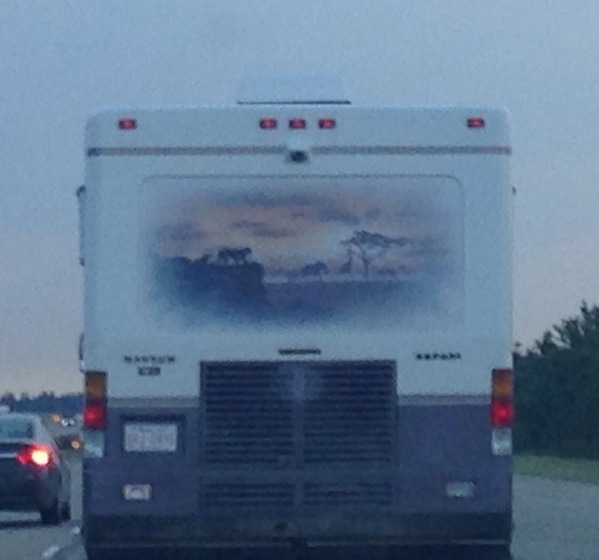 Multi-day stage races has been hosted in Fernie by the TransRockies racing series, Furious 3 and now the Fernie 3, and there is good reason for this as the trails are challenging, varied and right in and around the townsite. Fernie 3 is in its second year, and it has some problems with its inaugural race last year that has been somewhat resolved, but new ones had developed in this year’s race (I will discuss more about this later). I crashed pretty heavily on my left shoulder last year and I was still healing up from a broken right elbow so I was disappointed with my race. I even didn’t start the third day because I felt like I couldn’t ride effectively or safely in my condition.  As it turned out, they didn’t count the third day due to most of the field getting lost because of poor course marking. While I actually got a finishing time and placement for the race, it didn’t assuage my disappointment that I abandoned from the race.

This year, I wanted to make amends and have a solid showing at the Fernie3 so I started by getting a bike specifically for the race. I chose the Rocky Mountain Thunderbolt BC Edition because it had the Rock Shox Pike 130mm travel fork that I needed for the long and rough descents in Fernie as the downhill portions is where I lose time. I don’t fancy myself as a climber so this makes me very sad. I put on a set of gossamer Beard built Enve/Tune/Extralite wheels to help with the grueling climbs (F-you HyperVentilation).

With a proper gun heading to a gun fight, Brad picked me up Friday afternoon and headed to Mike V’s house, but we got delayed by a fellow cyclist with a huge bike trailer taking up an entire lane. Was this prescient for things to come this weekend? Anyways, once we were on the road we were surrounded by montage painted RV’s on Highway 2. My favorite one was this Lion King themed portrait on the back of a huge RV going 140km/h. We didn’t get to the condo till 1:00am so instead of going right to bed, we drank beer till 2:30am. How else would you reward yourself after a 6-hour drive in a lowered Subaru Forrester with floodlights attached to the roof. 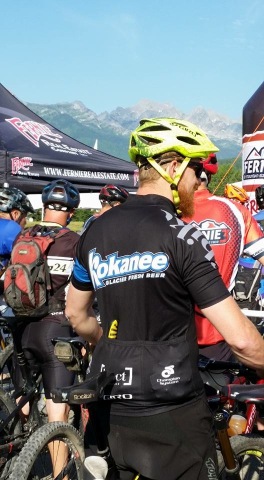 The first day of racing at the Fernie3 started at The Cedars, which is a new development on the resort side of Fernie, and the reported high that day was 34 C so managing the heat and hydration was paramount. I took a risk and took only one waterbottle with me as I knew there was going to be a lot of initial climbing and there were two aid stations-or so we were told. After the massive dustbowl that was created at the start due to the dry conditions and a twig stuck in my rear derailleur, we started the singletrack climb right away. Perhaps it was the one bottle strategy or the new Giro Synthe helmet keeping me cool, but I felt strong behind Steve Martins. We passed numerous racers who started faster than they should have so I knew we were in the top 20 at that point. At the first aid station, I filled up my bottle and continued on with Neil as he rode by. Similarly to the early ride with Steve, we set up a good pace together and caught and passed more racers. The three of us were riding well together, but then came the downhills-my nemesis. This time, while I did lose contact with Steve and Neil, I didn’t lose any spots from racers coming from behind me. The Thunderbolt allowed me to keep my speed up and take the faster, more technical lines. “Blue Thunder” kept me upright and smooth on the downhills without any crashes. I finished the day not getting lost which a significant number of other racers did due to a tricky turn in the Dark Forest trail. Overall, the first day was full of long and steep climbs, and with the heat, it was a day of sadistic attrition where racers had to show their mettle. The big bonus was that the race organizers had free beer at the end of the race; the rest of the day was a blur. 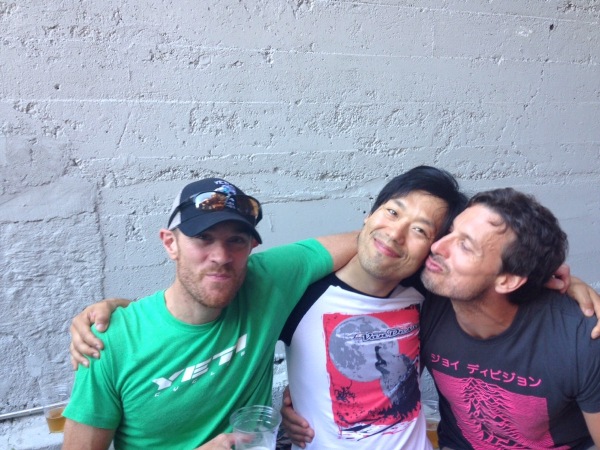 The second day started at the Aquatic Center and the race organizer promised us more cross-country trails despite starting us up HyperVentilation, which is an infamous switchback climb with a fantastic view that you can’t actually enjoy due to your heart rate hitting its max. But, after the climb, we rode Kush and The Coal Discovery Trail which were fast and flowing and added a fantastic sense of ease during the pain. This is why Fernie is known for their mountain biking trails. Continuing with the sadistic tendencies, just before you hit the finish line, you have to climb Sidewinder up for almost no other reason than for added suffering. Brad was quite upset about the emotional let down of that climb and the boring descent so close to the end, but I was just glad it was the last climb. The second day was significantly more enjoyable than the first day due to the sheer amount of amazing singletrack riding. I got mesmerized at one point in Kush and didn’t go race pace and I kinda didn’t care. At the finish line, most of us were wondering why the race organizer didn’t make the single day racers race the second day instead of the first. There was almost just as much elevation, but the course was mostly singletrack instead of the loose gravel trail on the first day and the climbs were more steady. 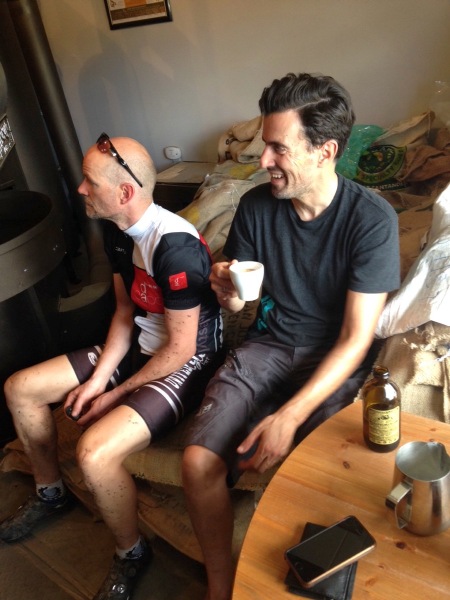 The third day was like a classic XCO race as the climbs were shorter and the course had some long stretches of flat trail-it was absolutely a pisser of a race. Great steady switchback climbs, flowing downhill, punchy singletrack. It had everything a mountain biker would want. It suited some racers really well as Jason R and Bob W rode with me that day and looked very strong. I was also mesmerized by Bob’s luscious blonde hair blowing in the wind behind him. At the finish line, everyone was very happy with the day’s race as it was the finishing one and the most fun. The race was so fast the times were very close from group to group. We even had some secret beer at the finishing area for those of us in the know. 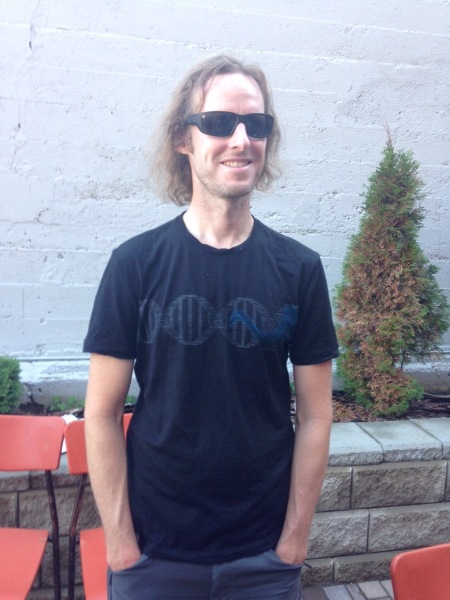 Without the egregious course marking from last year, people were significantly more celebratory at the end of this year’s race. There were some obvious criticisms that the Fernie3 race organizers should seriously take as sage advice. We were not impressed with the cheap paper number plates and the twist ties they gave us to fasten the plates to our bikes. They didn’t have enough marshals, properly stocked aid stations, ambassadors or EMS on the course. First aid was non-existent at the finishing area, there were no timed downhill sections and they ran out of jerseys. I know that putting on a race is onerous, stressful and ultimately thankless but hopefully they will make the appropriate changes for next year. The one thing they got right was having free beer at the finishing banquet. Things got slightly out of hand.

We finished the weekend with a guided tour of the Coleman trails by locals Troy and Lance. It was another hot day, but the trails were worth it because they were technical and rough. I didn’t bring enough water or food so I bonked on a very long climb to the top, but thank goodness Trevor is always prepared and saved me from being left in the woods to die. It has been quite a while since I’ve been in the back end of asshole intervals.

Now it’s off to Jasper for two days of more climbing and descending.